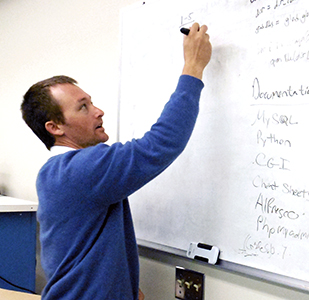 Alexander Self was born and raised in southern California, and is currently a junior at UH Hilo, pursuing a Bachelor of Science in Computer Science.  Prior to enrolling in the Computer Science program, Alex initially earned his Bachelor of Arts degree in Political Science in 2007.  Afterward, he started an agricultural business where he owned and operated a small coffee orchard and fruit-tree nursery.  Alex now hopes to enter a career in software development with one the observatories on the Big Island.  His hobbies include horticulture, programming, and sports.

The Smithsonian Astrophysical Observatory (SAO), along with collaborators around the globe, is in the process of designing and ultimately constructing a telescope in Greenland.  This process requires massive amounts of documentation, from bills-of material, engineering schematics, and work-flow diagrams, to any other relevant documents associated in the development of such a project.  As a result of the scale of the documentation required for this project, a database is needed to store and access all files associated with construction of the telescope. The database itself was engineered using the Python programming language for server-side logic, and Hypertext Markup Language (HTML5), Cascading Style Sheets (CSS), Jquery and Javascript for the Web-based client-side interface and stylistic framework.  As a result, users are able to upload any file by selecting radio buttons, which act as a key for the associated file.  After a file is uploaded into the database, each file can then be queried based on the key, and can be downloaded directly to the user’s computer.  This Web-based database is run on SMA’s server and is accessible around the globe through Plone, a content-management site, which also provides authentication for access.  Further improvements can be added for additional documentation regarding the key definitions that are associated with the files, as well as more specialized query options.