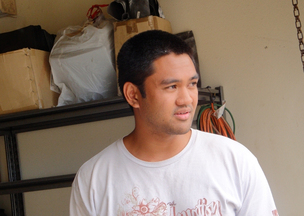 Institute when accepted: University of Hawaii at Manoa

In a single day, the sun can provide more than 10 times the energy used by everyone on earth. Photovoltaic systems have been designed to harness that incoming energy and are typically composed of photovoltaic (PV) modules, inverters, and tracking systems. Power inverters are critical for the proper utilization of energy generated by solar panels. An inverter converts the direct current generated by the module to alternating current, a form of energy that can be directly connected to the electrical grid. A tracking system moves the PV modules to follow the sun’s path in order to optimize system output. By introducing a tracking system, it is suggested that overall efficiency can increase by up to 40%. Performance ratings for photovoltaic components are commonly based on Standard Testing Conditions. Such ratings are idealized and are performed under controlled indoor conditions. Real world testing introduces factors such as dust and dirt, DC and AC wire losses as well as rapidly changing weather patterns. The purpose of this project is to characterize the performance of a micro-inverter system to be used in conjunction with a polar tracking system under actual weather conditions. A test setup consisting of two Solarworld SW175 modules, two Enphase M-175 Microinverters, and a polar tracking system were used to obtain characteristics of system performance based on real world conditions. The conversion efficiency of the inverter over varying levels of irradiance was determined by comparing module power output (DC) to inverter power output (AC). Also, power output was compared between a fixed PV system and a tracked system to determine the increase in efficiency.