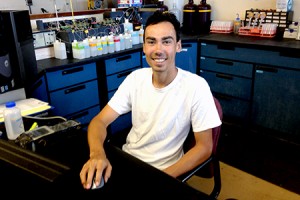 Kapono Gaughen has recently graduated from the University of Hawaii at Manoa, gaining his bachelor’s degree in Biology. Science has been a passion for Kapono from a young age. He also has an interest in politics and the political sciences. In the spring of 2012, he attended the Native American Political Science Program as one of the Native Hawaiian applicants, which was hosted by George Washington University in Washington, D.C. His career goals are to find a balance between science, politics, and the health field, which might allow him to help make a better life for those living here in Hawaii.

Project:  A Scope of The NELHA Anchialine Ponds

Anchialine ponds are landlocked bodies of water with a direct subterranean connection to the ocean. These ponds host endemic and indigenous species found in no other habitat. The chemistry and biological makeup of the anchialine ponds present on the NELHA property have yet to be fully understood. Exotic biota is present in some of the ponds that is believed to stress and degrade the ponds’ native species. The primary purpose of this experiment was to gather data on the relationship between tidal changes and the salinity of the anchialine ponds, which will allow for better understanding and future predictions about the behavior of the ponds. Secondly, the exotic biota present in the ponds was recorded, and measures were taken to remove the invasive species. To gather data on the salinity of the ponds, an in-situ CTD was placed in the ponds and recorded data once every 5 minutes over a large tidal fluctuation. This was repeated with the CTD moored to the bottom of the pond, and free floating at the surface. Two separate ponds were used for the sake of comparison. The invasive species were determined with visual observations, and traps were set up to remove them. With the gathered data on salinity and experimental trapping, recommendations will be made to NELHA on future practices to promote the health of native and endemic biota.