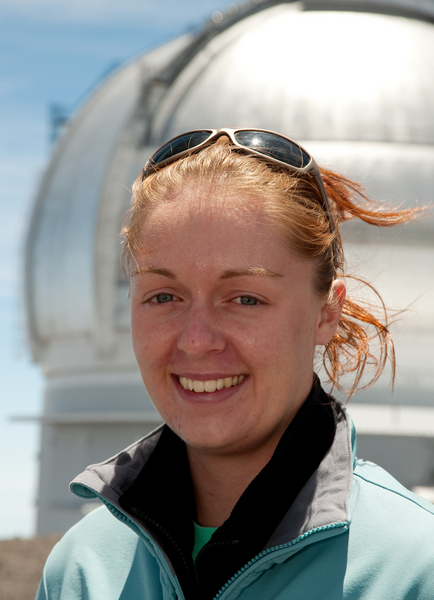 Lucia Poláková was born in Honoka‘a on the Big Island of Hawaii and was raised in Waimea.  She just graduated from Santa Clara University with a degree in Mechanical Engineering and a minor in Dance.  She is very happy to be back in Hawaii working for Gemini this summer, after having worked for CFHT last summer.  She would like to move back to Hawaii and continue working here.  Lucia enjoys horseback riding, mountain biking, dancing, singing, and spending time with family and friends.  She would like to pursue a career someday in alternative energy, particularly solar energy.

Gemini North Observatory is performing upgrades to their existing 12-watt sodium laser guide-star system, in order to improve reliability and to prevent against laser self-damage.  One of the upgrades involves installing a wave-plate rotator that will attenuate the IR laser beam during the first three hours after the laser is powered on.  During this warm-up period, the laser system has the potential to switch from stable mode-locking to Q-switch mode where power spikes can occur, damaging the Sum-Frequency Generator (SFG) crystal that combines the 1319-nm and 1064-nm IR laser beams to produce the 589-nm yellow laser beam.  The main objective of this project was to characterize and test a wave-plate rotator containing a 1064-nm half-wave plate.  This was done using a low-power test laser, a thin-film polarizer (TFP), a polarimeter, and two photodetectors.  First, tests were run to characterize the performance of the wave-plate rotator such as the backlash, hysteresis, and how the number of steps input by the user relates to the output in degrees of rotation.  Then, further tests were carried out to characterize the behavior of the wave plate, such as recording the change in power of the laser beam transmitted through the wave plate (and reflected off a TFP) as the wave plate was rotated.  A relationship between the angle of the wave plate and the power of the transmitted beam was determined.  This relationship was used to determine the angle at which to set the wave plate to send the laser beam power toward either the power meter or the SFG crystal.  The next phase of this project will be to install the wave-plate rotator on the laser optics bench on the summit at the Gemini North telescope, and to integrate its controls into the existing LabVIEW software.