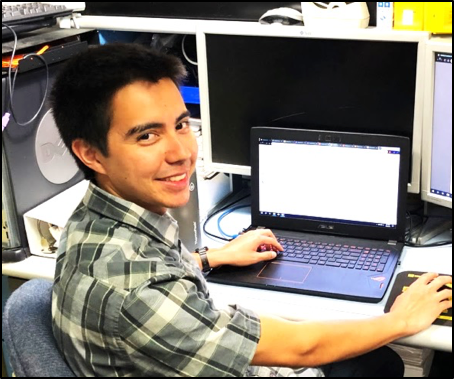 Abraham was born and raised in Hilo, Hawaii and graduated from Waiakea High School. He attended the University of Hawaii at Manoa and graduated in May 2019 with a bachelors degree in Electrical Engineering with a focus in systems and signal analysis. After graduating he plans to remain in Hawaii and pursue a career in research and development and to eventually start his own engineering business with his brother. In his free time he likes to go on hikes, go to the beach, play ukulele, and play video games.

Uninterruptible Power Supplies (UPS’s) are an important part of keeping the Subaru telescope operational and prevents critical systems from failing or shutting down improperly. When there are power outages caused by storms or other unforeseen events, the UPS’s ensure that critical systems remain powered to either shut down correctly or keep running until backup power is established. In 2018, two of the UPS’s at the summit went down causing the site to have limited capabilities for over a month resulting in the loss of valuable research and observation time. The current UPS’s at Subaru are old, outdated, and in need of replacement. To find suitable replacements research into the specifications and layout of the current UPS’s were conducted along with factors such as environmental aspects and load capacity. Some key findings pertained to the lack of atmosphere and the sub-zero temperatures at the summit which cause the UPS’s to derate and are major factors in determining capacity, runtime, and cooling. Subaru’s load capacity was found to vary greatly depending on which instruments are used but has a max load of 130 kVA (kilo Volt Amps) per unit. Other factors considered and researched were the input and output requirements, unit efficiency, battery capacity or runtime, footprint, and load type. Research was also conducted into lithium battery technology and the newest UPS units on the market. Lithium batteries were found to be an infeasible option due to the low temperatures at the summit which can cause complications with their recharging. Newer UPS models also offer options such as battery monitoring systems, maintenance bypass, and remote communication. With the information collected, three best fit units from Eaton, Vertiv, and APC were evaluated to create a cost and benefit analysis. Assessment of the UPS site at the summit led to a proposal for the parallel installation of the new UPS units. The proposed installation will be to place the new UPS’s in the room above the current UPS’s to minimize downtime at the cost of modifying the floor. A second alternative would be to replace each UPS one at a time over two days making no modifications to the existing setup but requiring more time. The research done in this project will help in deciding the future replacement UPS units and provide a plan for their parallel installation.