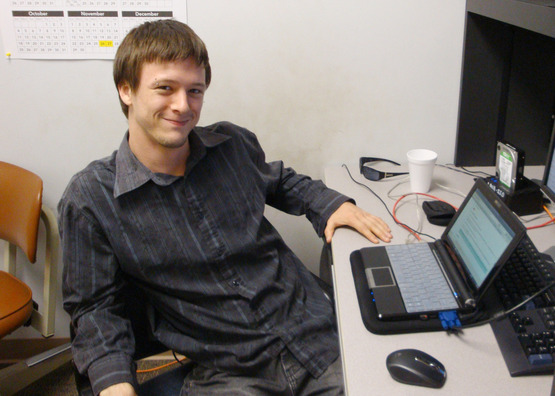 Andrew Wessels was born in Salem Massachusetts, but moved to Hawaii at the age of two. He graduated from Hilo High School in 2006, and is currently pursuing his Bachelor’s Degree in Computer Science at the University of Hawaii at Hilo.

His dream is that someday his efforts will help change the world.

Institution when accepted: University of Hawaii at Hilo.

Project Abstract: Atmospheric light known as “skyglow” can hinder the ability of ground-based sensors to detect faint objects in the night sky.  In order to help researchers monitor skyglow, we receive large amounts of data from a camera dedicated to recording images of the night sky.  In its raw form, this data is relatively inaccessible.  Python code has been written to process the raw data by extracting useful meta-information and preparing it for subsequent processing, by removing errors and storing it in a usable format.  The meta-information describes the context of individual data segments and allows us to extract desired information.  In place of the existing system, we have employed an SQLite database that provides a faster, more efficient interface — it reduces redundancies and enables the user to extract relevant statistics from any subset of the data.  Once stored, the meta-data must undergo a data-cleanup algorithm that we developed to correct inconsistencies.  We also created software to produce various data products using this database, such as images, video, graphs, and statistics, with plans for more products in the future.  The code has been packaged into a general library that can be used to streamline the data acquisition, cleanup, and production processes.  This will be an important tool for researchers interested in accessing this skyglow data, and hopefully this framework can be adapted for use with other datasets in the future.