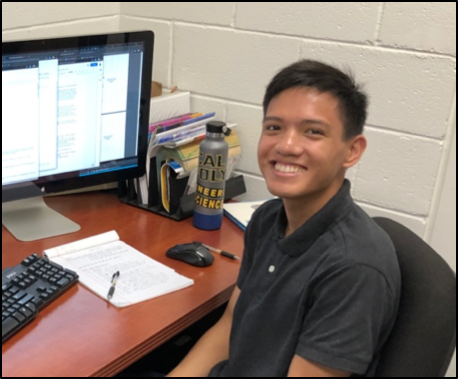 Christopher Artates was born in California and raised on Maui, graduating from H. P. Baldwin High School in 2016. At Baldwin, he dedicated much of his time to the FIRST Robotics program, but was also involved in the Japanese culture club, book club, and Science Olympiad, and volunteered with the Hawaii Animal Rescue Foundation. Christopher returned to California to study Computer Science at De Anza College in the Bay Area before transferring to California State Polytechnic University, Pomona, majoring in Electrical and Computer Engineering and minoring in Physics. He enjoys tinkering with hobby electronics and robotics and practicing his programming skills. Christopher serves as a STEM instructor for K-12 students around the Greater Los Angeles Area.

Gemini North Observatory upgraded their Laser Guide Star Facility (LGSF) to use a Toptica laser, replacing the decommissioned LMCT laser. An updated Beam Injection Module (BIM) was developed to position the laser along the same path as the previous one, controlling mirrors and polarizers to steer and attenuate the beam. In the commissioning phase of the new LGSF, flexure in the system necessitated the use of closed-loop motion control with encoder feedback to compensate for the flexure and variable travel distances as the telescope deviates from true zenith. The New Focus 8743-CL motor controller was selected for its support for closed-loop operation and its compatibility with EPICS control system software. However, the drivers available only provided open-loop control and basic motor commands, requiring manual configuration for operation. Additionally, due to power constraints, the controller can move only one motor at a time, limiting compound motion of two mirror axes to be sequential rather than simultaneous. For this project, I implemented driver-level support for closed-loop control and expanded the controller’s basic motor functionality. The updated driver, written in C and C++, maintains backwards compatibility with the open-loop model, works with the linear and rotary actuators in the BIM, and accesses previously unreported motor statuses such as limit switch triggering and the presence of an encoder. To allow for compound motion, I proposed a workaround in the BIM schematics where two controllers already in use on the optical bench would control two mirror axes independently. After testing the 8743-CL’s upgraded functionality and documenting the changes, the driver was commissioned for use with Gemini’s Laser Interlock System that controls the BIM and contributed to the EPICS community as open source software for others to use, modify, and replicate for other controllers and applications.