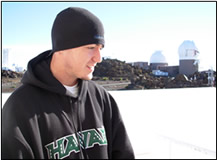 Jayson Nakakura is from Pearl City, Hawai’i. He is currently attending the University of Hawai’i at Manoa where he is majoring in electrical engineering

Institution when accepted: University of Hawai’i at Manoa

Satellite tracking is necessary in order to observe specific satellite activity and to image the activity with the highest resolution possible. This project involves testing the efficiency of an eight inch aperture telescope to track satellites. The objective of using a telescope with a smaller aperture is to track with a low residual error. If obtaining minimal residual errors is indeed possible when using a low powered, commercial telescope to track satellites’ orbit, then superior results are expected when using a much more sophisticated telescope. To be able to successfully track satellites, the telescope must self align, be GPS enabled, and have the ability to process satellite orbiting data, otherwise known as two line element sets. Also, a Complementary Metal Oxide Semiconductor (CMOS) chip enabled camera is needed to image the satellite as it passes by. By comparing the camera’s 640×480 pixel resolution with the known separation of two stars, an Instantaneous Field of View (IFOV) of .789 arc seconds per pixel is calculated. Next, the off-centered distance of the satellite in the image is compared with the camera’s FOV to determine the lowest possible residual error obtained. If a low error is achieved when using a small aperture telescope, then successful satellite imaging will be feasible when using a more advanced telescope. Results will be discussed.

Link to a PDF of Jayson’s project presentation.