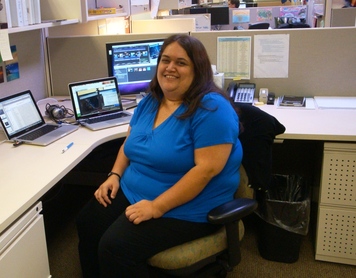 Kanoe is a senior studying Engineering Technology at UH Maui College.  She is the secretary of the UHMC IEEE Student Chapter and a member of the Phi Theta Kappa Honor Society.  She is working toward a career in scientific programming or software engineering, where she hopes to combine her computer skills with her interest in science.  She holds an AS degree in Electronic and Computer Engineering Technology (ECET) from UHMC, and a BA in Creative Writing from Linfield College.  In her spare time, Kanoe enjoys traveling, reading, and studying languages.
Institute when accepted: UH Maui College

The 3.6-m Advanced Electro-Optical System (AEOS) is the largest optical telescope in the Department of Defense.  AEOS is used to track and image satellites, many of which are Sun-synchronous and can only be imaged during the day.  Unfortunately, AEOS has limited daylight imaging capabilities; therefore a team of scientists and engineers from the Air Force Research Laboratory and Boeing are designing a Sun mitigation system to increase daytime use.  The proposed solutions are a baffle and a parasol. A baffle is attached to the telescope and minimizes stray light from entering the telescope, and a parasol is a disk that physically blocks sunlight from impinging on the telescope.   A series of tests were conducted on a commercial small-scale telescope with a similar open truss design to AEOS in order to determine which solution best improved imaging.  Early tests favored the parasol, but since it would cost approximately ten times more than the baffle, it was important to quantitatively evaluate the difference.  This experiment was done in two parts. In the first part, images were taken on a Basler plA640-2103 CCD camera connected to an Orion SkyQuest XX12g GoTo Dobsonian telescope.  Data was collected under three telescope configurations: no Sun protection, with a baffle, and with a parasol. The images were compared for the three telescope configurations to estimate resolution improvement. In the second part, sky intensity as a function of angle from the Sun was measured to determine which solution enabled the smallest Sun exclusion angle.  These results will assist the Daylight Imaging team in determining which Sun mitigation system to implement.