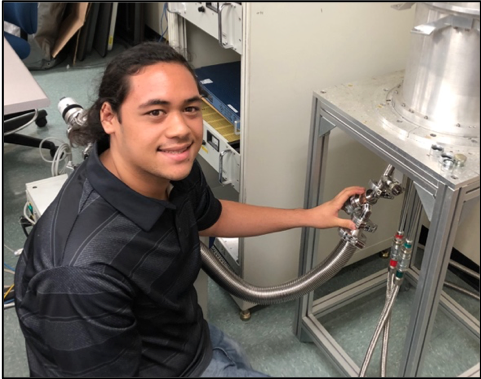 Johnathan Kuamoo is from the island of Maui where he graduated from Kamehameha Schools Maui in 2016. Currently, he is a Junior attending the University of Hawaii Maui college to pursue a bachelor’s in Engineering Technology. Johnathan hopes to become an Electrical Engineer after earning his degree. In his free time, he enjoys playing video games, taking care of his animals and trying to work out.

SMA/ASIAA has a radio array located on Mauna Loa called YTLA, which has 7 antennas. Each antenna needs a receiver to reduce electrical signals from the atmosphere and heat contributing to radio noise. The receivers are cryogenically cooled to reduce noise, but to reduce the interference there are Low Noise Amplifiers (LNAs) that amplify the correct signals being sent to the antennas. The problem is that the temperature sensors on the receiver are not working, making it impossible to tell if the receivers are being cooled to 10 Kelvin. Next, since the sensors are new, and come with a Lakeshore monitor, there are two sets of information coming from the receiver. One set will go to the Lakeshore monitor and the other set is from the LNAs that amplify signals to go to an electronic distribution box that sends signals from the antennas to SMA/ASIAA’s computers. For the temperature sensors, we installed the new sensor called the DT-600 series and took out the old sensors. To check the sensors, we cryogenically cooled the receiver and then used the Lakeshore monitor to test if the sensors are working. To create the cable, we separated the wires that contained information to reduce noise and of the temperature readings using a breakout box. The Lakeshore monitor revealed correct installation, showing that the LNAs in the receivers were cooled to 10 Kelvin. With the results of the project, SMA/ASIAA will be able to ensure that their receivers are being cryogenically cooled correctly. Using the new temperature sensors and cable design, they can use the first receiver as an example to integrate the new sensors into the rest of the receivers.