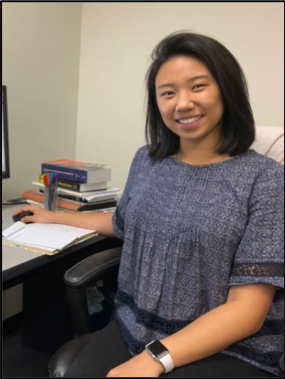 Queenique Dinh is a graduate of Moanalua High School, but was born in California and raised in Virginia before moving to the island of Oahu. Continuing the passion for space she fostered at a young age, Queenique is majoring in astronautical engineering at the University of Southern California and is particularly interested in orbital mechanics and space mission design. At school, she serves as an executive board member for USC’s chapter of the American Institute of Aeronautics and Astronautics. Outside of academics, Queenique is also an executive board member for the SC Ballroom and Latin Dance Team. She enjoys practicing American Smooth dances and competing in Southern California’s collegiate dancesport scene.

The focus of this work is to find transfer trajectories between near-Earth orbits and families of periodic orbits localized in the Earth-Moon (i.e. cislunar) neighborhood.  Certain simplifying assumptions are required to do so. The first assumption is that the cislunar space is characterized by employing the Circular Restricted 3-Body Problem (CR3BP), which describes the motion of a body with negligible mass under the gravitational influence of two primary bodies moving in circular orbits around their barycenter.  In this highly idealized dynamical system, the equations of motion produce five equilibria, also known as libration or fixed points, that remain in their positions relative to the two primaries as the system rotates. The families of periodic orbits emanate from these libration points. In this study, AUTO-07p, a numerical continuation and bifurcation software, is used to generate the families of periodic orbits, specifically those around the stable L4 and L5 libration points.  The initial conditions from AUTO-07p are then ported to MATLAB to find transfer trajectories. The second simplifying assumption is that the potential transfer trajectories are found by considering only the Keplerian orbital elements (e.g. eccentricity and semi-major axis) as solved for by using Lambert’s problem, a type of two-point boundary value problem. The results of this study can serve as reference solutions for higher fidelity models with additional perturbations, such as the gravitational effects of other major bodies.  With a growing revival of interest in returning to the Moon, this study provides insight into creating pathways that connect traditional near-Earth orbits to periodic and/or quasi-periodic orbits in cislunar space.