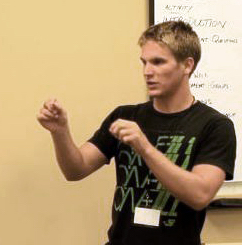 Aaron Pigott was born in Honolulu and raised on the island of Kauai.  Graduating from Kauai High School in 2010, Aaron decided to pursue a Bachelor of Science degree in Aerospace Engineering at Embry-Riddle Aeronautical University in Prescott, Arizona.  Aaron’s engineering interests include mechanics and Computer-Aided Design.  His hobbies include surfing, swimming, soccer, flying, and triathlons.

Data centers use a tremendous amount of power in their servers, uninterruptable power supplies (UPS), and computer room air conditioners (CRACs).  While servers and UPSs are currently essential, the cooling of data centers is a topic worth “greening.”  It is estimated that an equal amount of power is used to cool a computer room as is used to power the computers.  Canada-France-Hawaii Telescope’s (CFHT) current CRAC system costs the company roughly $40,000 per year, using 98,000 kWh.  A great deal of energy and money can be saved by using outside ambient air to cool the computers.  At CFHT, the project began with shutting off two unnecessarily used backup CRACs.  Second, plans were drawn of a proposed ducting route to bring outside ambient air into the cold aisle and duct hot exhaust air back outside.  Third, hot aisle/cold aisle containment practices were discussed, using vinyl curtains and blanking panels to partition the room and eliminate the mixing of the air.  The system uses two duct fans to bring in cool air from the enclosed courtyard and exhaust the hot air to the roof outside the building.  Finally, a heat-load calculator was used to determine the required airflow and a proof of concept (POC) was conducted.  The POC used two portable duct fans to simulate the planned final arrangement and ensure its success.  Through the use of “free” cooling, we have proposed savings of 87,000 kWh and $35,000 per year.  Measures should be taken globally to conserve energy by examining options for “green” cooling.