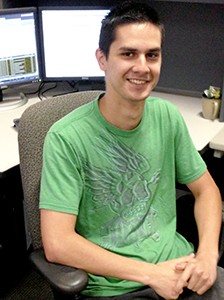 Helaman Tafua was born in North Carolina, but has lived in Hawaii for most of his life.  He has traveled to England and Ireland, and lived in Australia with his sister for a year.  Helaman currently lives in Pahoa, Hawaii, where he attends UH Hilo, and plans to complete his bachelor’s degree in Computer Science in spring 2015.  After graduating, he would like to earn experience anywhere within the tech industry, but one day wishes to become a video game/app developer.  In his spare time, Helaman enjoys spending time with his family, playing video games, improving his programming skills, and practicing his Samoan fire knife dancing.

With growing concerns for preserving confidential information across the Internet, Akimeka is researching automated system development to detect nefarious behavior at the application server level.  This detection mechanism applies advanced analytics algorithms against data collected from application server logs.  The result of these analytics is a set of indications and warnings that imply nefarious behavior, either by authorized system users or by intruders intent on stealing information.  Our work in this research involved implementing analytics through business intelligence tools and NoSQL database implementations.  Our research was focused on evaluating NoSQL database platforms, choosing a platform to best model our problem space, and then implementing the platform using data collected from Akimeka application servers.  After completing the data modeling in a NoSQL database, we were able to collect measures that allowed analysis of the data.  The measures formed vectors that were implemented in a Support Vector Machine (SVM), a form of machine learning that allowed us to train software to predict whether a group of activities were an indication of nefarious behavior.  While the expected result of this work will be better protection of application data at Akimeka, the techniques we developed can also be extended to other organizations and be used to protect their systems.