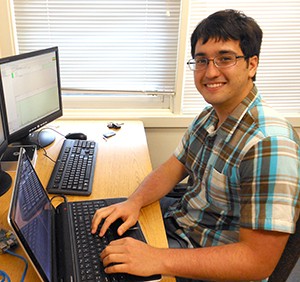 Kully Kekaula-Basque was born and raised in Kona. Having graduated from Kealakehe High School, he now attends Columbia Univ. in New York City, where he will be a sophomore this fall.  Kully intends to major in Computer Science with a prospective track in artificial intelligence, as well as pursue computer science in graduate school.  In his spare time, he participates in robotics organizations, and enjoys both video games and exploration.

Project Abstract: The W.M. Keck Observatory’s domes lack high-speed communication, inhibiting the installation of essential instruments and preventing access to the Internet.  Simple solutions to the problem, such as directly installing Ethernet or using Wi-Fi, cannot be employed as a result of engineering restrictions.  The rotation of either Keck dome would sever any wires entering the dome, and the Mauna Kea summit prohibition on the use of radio waves prevents Wi-Fi.  The goal of this project is to circumvent these restrictions and establish high-speed communication into the domes.  An alternative method—utilizing power-line adapters—can be used to transmit Ethernet over the 120-volt slip rings into the dome, thereby bypassing any engineering obstacles.  Furthermore, a Raspberry Pi can be used to monitor the network communication and analyze ping time, packet loss, and network jitter to determine the viability of the Ethernet connection.  It was found that a critical amount of data is lost when the dome shutters are moved—for several minutes at evening and dawn—indicating that magnetic flux is disrupting communication.  While such interruptions may be acceptable for data from anemometers and other weather instruments, many prospective applications may require steady communication.  Future endeavors to install a noise filter will be undertaken to mitigate disturbances and provide continuous data.