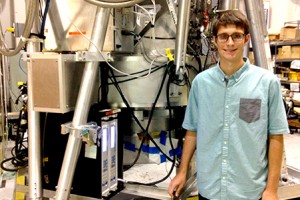 Luke van der Spoel was born in South Africa and has lived on the Big Island of Hawai‘i since his fifth birthday. He graduated from Kealakehe High School in Kailua-Kona in 2013. He is currently a sophomore at Rice University in Houston, Texas, pursuing a Bachelor of Science degree in Electrical and Computer Engineering. Luke’s degree focus is systems engineering and signal processing. After graduation, he plans to attend graduate school with the hope to work as a design engineer in industry.

Project Title: Design and Implementation of a New Temperature Control System for MOIRCS

Project Abstract: One of the primary instruments in use at the Subaru Telescope is the Multi-Object InfraRed Camera and Spectrograph (MOIRCS); currently MOIRCS is at the Subaru base facility where modifications and repairs are being made. These modifications include the updating of the temperature control system, which keeps the instrument at 77 degrees Kelvin. The purpose of this project was to assist in the designing and implementation of this new temperature control system. The principal component of the new system is the Lakeshore 336 Temperature Controller; Subaru has acquired two of these for use in MOIRCS. The Lakeshore 336s have a built in proportional-integral-derivative controller, but must be integrated into and configured to work with the rest of the system, including the sensors, external power supplies, heating resistors, and existing wiring within MOIRCS. The old temperature controllers had completely different connectors and wiring to the Lakeshore 336s so new cabling was designed and constructed; adapters between the existing sensor wiring and the new system were also implemented. By themselves, the Lakeshore 336s are unable to provide enough power for the heater resistors, which necessitated the integration of two external power supplies. These power supplies were programmed to vary their output with the information coming from the Lakeshores’ analog outputs. Comprehensive documentation on the new set up was completed to ease the way for future upgrades and modifications. The new temperature control system will allow for sensor readouts and power usage data to be accessed remotely through the Subaru Network. Additional sensor ports and sensors have been added, providing for holistic monitoring of MOIRCS. The implementation of the external power supplies will reduce the power usage of the temperature controllers themselves, which were previously operating at maximum capacity, and will result in a safer and more reliable control system.