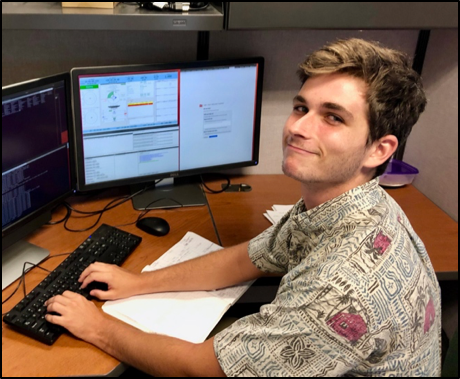 Nick was born and raised on the Big Island of Hawai’i, and is in the senior year of his computer science degree at the University of Hawai’i at Hilo. He has entrepreneurial ambitions, is a big proponent of natural conservation and hopes to utilize computer science in a way that is beneficial to his local and global communities. His auxiliary interests include music production, audio engineering, surfing and filmography.

At the Subaru Telescope on Mauna Kea, astronomical observations are conducted using command scripts that are passed through Subaru’s Gen2 observation control software. These commands are then sent to proprietary software to control subsystems such as telescope mount drive motors. Encoders would then provide status information. such as telescope position to the Gen2 interface. To ensure that scripts run as intended, testing them is beneficial. Currently, testing requires usage of the real telescope, which takes valuable time and resources to the point that testing is rarely conducted. Furthermore, creating an isolated test environment using the proprietary control framework is not possible. To make testing feasible and to provide a training environment for new operators, we have used Python3 to develop the Subaru telescope simulator (TELSIM). For TELSIM, I modeled and implemented each major component of the telescope control system as software components, building upon the requirements as laid out by the Subaru Telescope software team. These requirements included the simulation of mount rotation, focus selection, instrument rotation and tracking/autoguiding. Modeling each component required careful communication with system operators to understand the behavior of functionality and to validate our implementation. For more complex component behaviors, telescope observation logs were parsed for status patterns and reverse engineered based upon well-known astronomical concepts. In place of the Mitsubishi control structure, TELSIM interfaces with Gen2 to simulate the behavior and status of the Subaru telescope. As the Gen2 interface remains untouched, users can seamlessly operate TELSIM as if controlling the Subaru Telescope using the aforementioned command scripts. Upon completion, TELSIM demonstrates not only a promising platform for testing observation scripts, but also for training support astronomers and telescope operators.