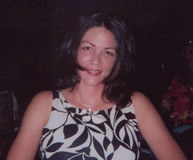 Suzanne Burns received a Bachelor’s Degree in Psychology from Azusa Pacific University in 1997.  She is now in the Electronic and Computer Technology Program at Maui Community College on course to a Master’s degree in computer technology.  With a background in avionics, she is also building her experience and education in electronics through computer instruction. She lived in South East Asia for four years and loves the outdoors, traveling, language and cultures, and ethnic music.  Suzanne was born and raised on Oahu and moved to Maui in 2001.

Earth’s atmosphere distorts incoming light when viewing astronomical objects from a ground based telescope. This distortion is caused by turbulence from random irregularities caused by heat and wind. The degree to which the light’s wave front is affected by this turbulence is characterized by a parameter called R0. R0, or Fried’s parameter, can be thought of as the size of a “clear window” in the atmosphere that allows light to pass through undistorted. Above Mount Haleakala on Maui in Hawaii, R0 fluctuates from 5cm to 17cm. When R0 is smaller than the aperture of a large telescope, the image quality of the telescope is limited by R0, not the telescope aperture. The goal of this project was to create a program in C++ that estimates R0 from a telescope image. The code opens an ASCII formatted image file taken from AEOS, determines the threshold of the pixel intensities, calculates the centroid width, and computes R0. Then it calculates a second threshold at a percentage of the maximum intensity, applies it and displays R0 at that second threshold. This aids scientists in determining the telescope’s optimum system performance to image an object at a particular time. The R0 calculator default settings are specific to AEOS, but can easily be altered for use by another telescope.

Link to Suzanne’s project presentation from the 2006 Symposium.