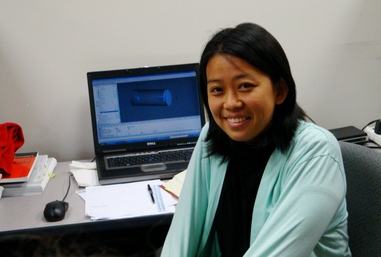 Amanda Yamamoto was raised on Maui and graduated from Lahainaluna High School. She currently attends the University of Hawaii at Manoa as a Mechanical Engineering major and will be a junior this fall. She likes to cook, hike, and watch movies .

Metric quantification of Earth-orbiting space objects is of paramount interest in the ongoing proliferation of man-made objects in space. Objects with non-quantified orbits pose a serious threat to operational communication and scientific satellites. The use of small (sub-meter) telescopes during nighttime conditions has been demonstrated to be very effective in determining satellite positions. To achieve a similar effectiveness through the use of these telescopes in daytime conditions is highly desired. However, this is a challenging task given the radiant conditions imposed by a bright daytime sky. In this project, the application of chopping and nodding techniques to detect faint objects on a bright sky background is explored in the context of sub-meter telescopes. A generalized optical model was constructed using the FRED optical engineering software package, which fuses accurate radiometric conditions with detailed physical models of small telescopes, including Ritchey-Chrétien and Schmidt-Cassegrain designs. The simulation also incorporates detailed coatings and scattering properties onto optical and non-optical surfaces within each telescope system. Chop/nod methods are tested by ray-tracing light from the sun, sky, and object through the telescopes onto a detector. Investigated chopping methods include tilting the secondary mirror, tilting a turn mirror in front of the sensor, and tilting a transmissive wedge in front of the sensor, while nodding simulations simply involve tilting the entire telescope. The results of these tests will determine which chop/nod method is optimal for daytime observation of satellites.