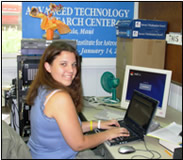 Hazel Butler is currently an undergraduate at the University of Hawai’i at Hilo. She plans to graduate in May 2007 with a B.S. in astronomy and with minors in physics and mathematics. During the school year, she works as an interpretive guide at the Visitor Information Station on Mauna Kea, where she can share her passion for astronomy with the public. When not studying, she enjoys going to the beach and hanging out with her fellow astronomy majors.

When observing astronomical objects with ground-based telescopes, turbulence in the atmosphere corrupts the quality of the recorded images. This greatly reduces the amount of information that can be extracted from the collected imagery. Image restoration overcomes this problem by using prior information about the observed object, the telescope, and the statistical nature of the turbulence. Such information is used with the data to obtain a higher quality image. A multi-frame blind deconvolution (MFBD) algorithm can be used to estimate the object image using this prior information. MFBD uses the fact that the object is static, while the atmospheric distortion changes randomly during the observation. Since atmospheric turbulence changes from frame to frame, and the object is stable, one can find the commonality between the multiple frames as a way of estimating the image of the object. The purpose of the project was to study the fidelity of object and point spread function estimates obtained from a MFBD algorithm when information about the telescope, like the pupil function, is imprecisely known. This was done by analyzing the results of the MFBDs estimation of the object versus the true object at various pupil functions when the pupil function was known, but withheld from the algorithm. The differences between the error in the high and low frequencies of the image were also analyzed. The results indicate that using the incorrect pupil function in the MFBD algorithm will result in higher errors. This result will help in the improvement of image restoration of near Earth objects and help better protect the intelligence and communications systems that orbit around Earth.