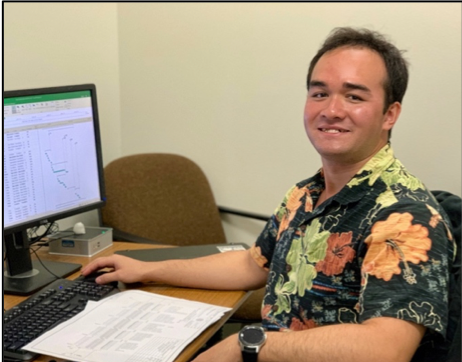 Royce Nainoa Cornwell was born and raised on the island of Kauai. He has always been interested in science and mathematics. He has earned an Associate in Science Degree in Electronics at Kauai Community College and is currently enrolled at the University of Hawaii Manoa pursuing a Bachelor’s Degree in Electrical Engineering. After graduation, he plans to find a career in optics or electro-physics in Hawaii. Eventually he also plans to earn a Master’s Degree in Electrical Engineering. As a native Hawaiian, he aspires to bring innovation to the state of Hawaii. He has studied abroad in Japan for one year to cultivate his communication in Japanese. In Kauai Community College, he was the President of Phi Theta Kappa Honor Society and tutored students learning electronics and mathematics for 2 years. His hobbies include, playing video games, practicing piano, learning Japanese/Chinese language and studying astronomy.

The Keck Observatory at Mauna Kea houses two ten-meter telescopes, each accompanied with Adaptive Optics technology that uses high-powered sodium lasers to generate artificial stars to support removal of atmospheric distortion from their observations. These Class 4 lasers output sufficient power that can pose a danger to personnel, aircraft, and even satellites upon contact with the beam. To mitigate these hazards, a safety system designed to support ANSI Z136.1 and Z136.6 standards (Safe Use of Lasers Indoors and Outdoors) was implemented to support safe propagation. The safety system consists of a Programmable Logic Controller (PLC) and sensors to determine when it is safe or not safe to propagate the laser beam. It does this by communicating with the laser system via a hardware interface to turn OFF power or close its shutter. The PLC also has an interface allowing the user to monitor the laser status, the temperature of the heat exchanger, and its status of the beam train.The Keck I laser is scheduled for decommissioning and will be replaced by a new laser with higher return and efficiency. My project was to build new hardware, and update the existing software in the safety system to allow the PLC to interface with the new laser and associated infrastructure changes. One new feature that was added to the system is the use of lock-out-tagout (LOTO) switches. The main purpose of the LOTO switches is to improve personnel safety by disabling laser functions (e.g. laser power via shutters) and prevent them from turning back on in case personnel need to make adjustments to alignment, troubleshoot problems, or replace parts in the laser. I began by reviewing the project requirements, previous safety system designs and making changes to the existing designs. After planning the wire layout for the new hardware, I built the new wiring and cable assemblies to be installed with the existing PLC. While assembling & connecting wires, it was important to be consistent with color coding for wires, otherwise a ‘Laser status ON’ button might have been mis-wired with an ‘Emergency STOP’ button. In order for both the existing and new hardware to communicate with the laser, the PLC software (ladder logic) needed to be reviewed and updated as well. One major challenge was to ensure the existing safety system parameters are maintained while introducing new functionalities. If the existing parameters were changed incorrectly, it would negatively impact the safety system functions and performance. Careful testing and documentation was necessary to avoid errors such as incorrect connectors in wiring diagrams, or software code issues. During integration and testing, these errors were addressed, and the new hardware is able to communicate with the safety system successfully. By the time the new laser is installed in October, the safety system will be ready to operate with it improving telescope observations.