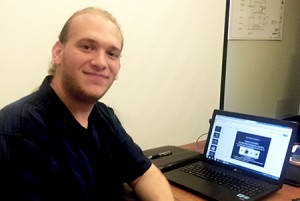 By age thirteen, Saxon Knight had been to six different public schools and transitioned through private school into home-based autodidacticism. He and his mother moved at least twice a year, so he turned to the internet for socialization and began to indulge in the hobbies (programming, 3D modeling, and math) that would later lead him to go to school for engineering. Saxon has been attending the University of Hawaii Maui College, taking higher math and physics courses and working as a math and science tutor with the goal of obtaining a bachelor’s degree in Mechanical Engineering and a master’s in Aerospace Engineering. His career goals are to work for an engineering-based company such as Boeing, SpaceX, or NASA in either advanced weapons systems or specialized-vehicle transport systems.

Project Abstract: Professional grade telescopy for ground-based satellite imaging has mostly relied on cumbersome and expensive primary mirrors. The high cost and time required to adequately polish a primary is a severely limiting factor in production and deployment of telescopes, but new, cost-effective alternatives to the highest-quality mirror approach are being researched. One such alternative is the Flexible-replicated Large Optical Post-Processing Investigation (FLOPPI) concept, which combines poor quality optics (e.g. carbon fiber-reinforced polymer, CFRP) with image post-processing algorithms using peripheral sensor data to restore imagery to a high-quality-mirror equivalent. To investigate the viability of a low-cost, poor-optical-quality telescope concept in satellite detection and imaging, trade studies were desired on varying CFRP optical quality, atmospheric turbulence, peripheral sensor specifications, and satellite brightness. To facilitate these studies, the Daylight Object Restoration Algorithm (DORA) was used to restore images with and without modeling the static aberrations imposed by a poor-quality primary’s surface. A color-map digitizer was also developed in Python to extract and convert data from surface-figure image files that would be used with DORA and, to ensure its accuracy in digitizing other images, was tested against the only available surface-data color-map-image pair via visualized differencing and a root-mean-square error (RMSE). The results were found to have a high visual correspondence and a low RMSE of 0.274 radians. An initial comparison of restored, simulated, ground-based images of the Hubble Space Telescope (HST), including cases where static aberrations from the observing telescope primary’s surface were both modeled and neglected, as well as for two different Shack-Hartmann lenslet densities of 14×14 and 28×28, revealed a better restoration was possible in higher turbulence conditions and with lower-quality optics when the static aberrations of the primary were modeled as opposed to neglected. It is concluded that the FLOPPI concept at 0.8-m apertures and a wavelength of 800 nm is thus far viable in median turbulence conditions and is a favorable approach for lowering production costs and ultimately promoting vastly increased mobility of high-visual-quality imaging systems. It is also suggested that the FLOPPI concept would be a good complement to other technologies with the same goals in mind.