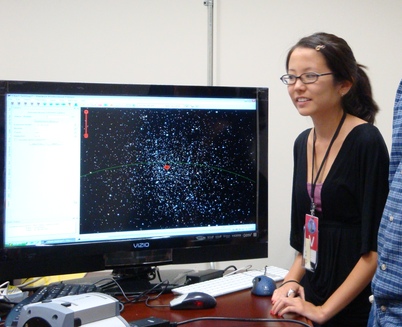 Laurie Hozaki was born and raised on the island of Maui and has lived there most of her life.  She is currently attending UH Maui College and is pursuing an A.S. degree in the Electronics and Computer Engineering Technology (ECET) program.  After graduating, she hopes to further her education by getting a bachelor’s degree, and then to find a job in the tech industry.  Apart from academics, she likes to play video games, read books, and go hiking.

The Iridium and Cosmos satellites that collided in 2009 produced 1700 pieces of new space debris.  Therefore, it is important to track this debris cloud to protect operational satellites.  Persistent observations of this debris cloud are needed to meet the space surveillance objectives of the U.S. Air Force.
Optical satellite tracking systems usually operate during the night.  Since satellites orbit the earth during both day and night, it is also important to track satellites during the day.  The challenge of tracking satellites during daytime is to select a charge-coupled device (CCD) that will maximize its signal-to-noise ratio (SNR) by optimizing the integration time and read noise, while suppressing the sky background.  A CCD with a fast frame-readout is needed to maximize the temporal resolution of each pass and to prevent saturation from the sky background.  To maximize the SNR, we also need a CCD that has low read noise.  Finally, to suppress the sky background, we need to select an optimal filter stack combination using I-band and neutral-density filters.
Three CCDs were selected for testing: Apogee, Fairchild, and Andor.  We selected the electron-multiplying charge-coupled device (EMCCD) frame-transfer Andor iXon 897 camera.  One of its limitations is that it runs on a Linux-based computer, which is not compatible with the rest of the telescope system.  We are researching commercial off-the-shelf (COTS) Windows-based software, such as CCDSoft or MaxImDL, that will be able to control the camera while also being compatible with the telescope-control system.