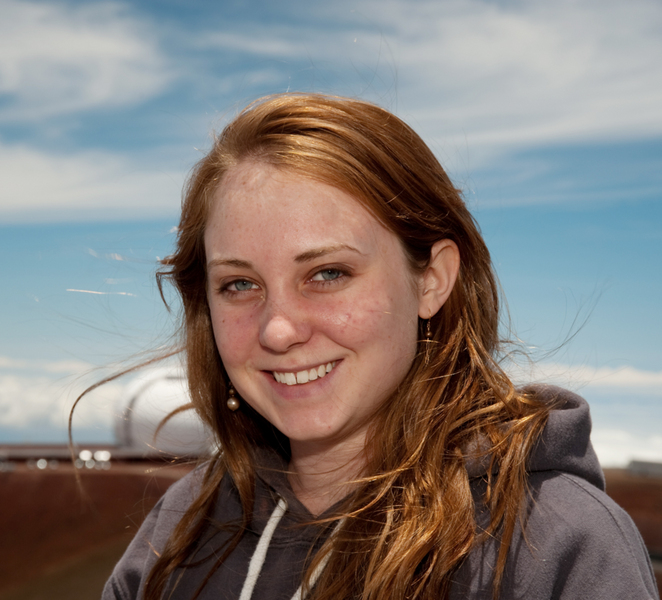 Born in Washington State, Linden Hale moved with her family to the Big Island at age 10, where she began to cultivate her fascination with the natural world and the cosmos. After graduating from Parker School in Kamuela, she moved to Seattle to attend the University of Washington.  Without really meaning to, she ended up in an introductory astronomy class, which became the true ignition for her decision to pursue a double major in Astronomy and Physics.  Entering her sophomore year this fall at UW, Linden enjoys dancing, doing yoga, and photography.

Open clusters—groupings of stars that have formed at the same time, from the same molecular cloud, and remain loosely gravitationally bound to each other—are excellent tracers of the formation and evolution of the Galactic disk.  Because star clusters reflect the age, composition, and other properties of the interstellar clouds from which they formed, observing the properties of the stars within these clusters informs our knowledge of the Galaxy at the time period and location of their formation.  The oldest open clusters were born during an era of transition from even older globular-cluster formation to open-cluster formation.  This unique position in Galactic history, as well as the clusters’ generally large galactocentric radius, height above the disk plane, and sensitivity to the gravitational effects of surrounding masses, make the study of the surviving old clusters a topic of particular interest.  For this project, I was presented with multi-object spectra of two of these old open clusters, Berkeley 54 and NGC 7789.  The spectra were collected using LRIS (Low Resolution Imaging Spectrometer), mounted at the Cassegrain focus of Keck I.  NGC 7789, for the purposes of this project, was used as a standard cluster whose galactocentric radius, relative age, radial velocity, and metallicity (elemental content of the stars within the cluster) have been previously determined and set to a standardized abundance scale published by Friel et al.  The spectra of both clusters were reduced using IRAF (Image Reduction and Analysis Facility), and I created a program that used the reduced data to determine the abundances of various metals (primarily iron) for each star within the clusters.  It is expected that Berkeley 54 will follow previously observed abundance gradients, showing a decrease of cluster metallicity with distance from the Galactic center, and a lack of correlation between metallicity and cluster age.