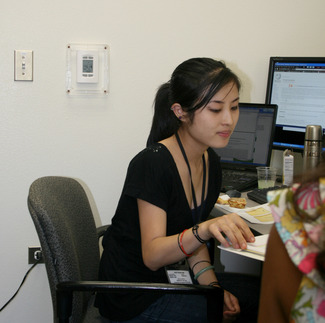 Born and raised in Hilo, Natalie Nagata graduated from Hilo High School in 2008 as a class valedictorian.  After spending a year at Harvey Mudd College in Claremont, California, she decided to return to Hawai‘i for personal reasons.  Entering her junior year in Fall 2010, she hopes to eventually return to the mainland to complete her undergraduate education as a Physics major and Math minor.  Fascinated by the elegance of relativity and the Standard Model since high school, Natalie intends to pursue a master’s degree and possibly a doctorate, in hopes of working in research or teaching at a university.  In her spare time, she enjoys reading novels by Agatha Christie and watching black-and-white films.

Akamai Project: An Analysis of the Effects of Self-Induced Seeing on Image Quality

Ground-based astronomical observations are limited by a phenomenon known as “seeing”—the degradation of image quality due to light passing through turbulent air.  Seeing results in the blurring of objects and the reduction of contrast.  It is typically characterized by measuring the full-width at half-maximum (FWHM, in arcseconds) of the brightness profiles of stars in an image.  There are two main types of seeing: natural seeing, caused by wind and thermal convection high in the Earth’s atmosphere; and self-induced seeing, caused by similar disturbances in and around an observatory dome.

The goal of this project is to quantify the three main types of self-induced seeing—mirror, chamber, and enclosure seeing—and to evaluate their relative importance.  Overall self-induced seeing was determined using data from the Differential Image Motion Monitor (DIMM) in the Mauna Kea Weather Center (MKWC) archive, and data from the Altair & P2 wavefront sensors in the Gemini Engineering Archive (GEA).  Given that seeing is caused by wind and thermal gradients, extensive data mining and reduction were performed within the GEA and MKWC archives to extract temperature and wind velocity for key locations in and around the Gemini North Telescope.  Thus, the three main types of self-induced seeing can be quantified as a relationship between temperature differences (?T), wind velocity, and seeing FWHM.  Based on reports on self-induced seeing from other observatories, it is likely that mirror seeing will be the dominant component.  Also, convection-boundary calculations can be used with physical ?T data to determine which convection regimes were present during observations.  Ultimately, acceptable ranges of ?T and wind velocity can found that correspond with Gemini’s error budgets for FWHM.  Unfortunately, a number of unexpected behaviors in the seeing data were discovered during data mining, indicating several possible sources of error and leaving room for further investigation.