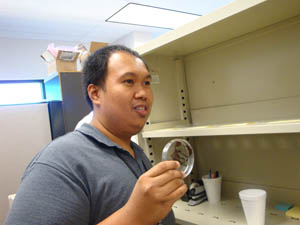 Raynel Ulit Corpuz was born and raised on Oahu. He graduated from Waipahu High in June 2002. He is currently a senior at the University of Hawaii, Manoa, majoring in Electrical Engineering and will graduate in Fall 2009. He plans to continue his education in graduate school with a M.S. and Ph.D. in Electrical Engineering. His current interests include in signal processing, support vector machines, and wireless communications.