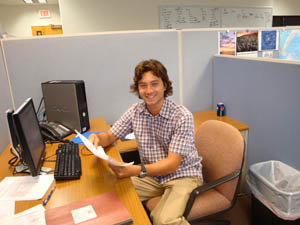 Austin Barnes is from Aiea, on the island of O’ahu. He graduated from Iolani School in 2006 and currently attends Harvard University, pursuing a Bachelor’s degree in Astrophysics and Chemistry, graduating in 2010.

He also loves to surf and of course dabble in astronomy when he can.

Project Abstract: At a time when there are more than 19,000 pieces of debris large enough to cause catastrophic damage to the 3,000 pieces of functional equipment orbiting the Earth, space situational awareness is more important than ever. There is increasing pressure and necessity worldwide to improve the ability to identify and track objects in orbit. Oceanit’s High Accuracy Network Determination System (HANDS) offers an effective and affordable solution. HANDS is a network of robotic telescopes at ground stations around the world, allowing global object-tracking coverage. Oceanit’s science team has written a data pipeline designed to quickly and automatically process the stream of incoming images in order to obtain photometric signatures of satellites. The calibration star correlator, a section of the pipeline, matches stars from images taken by the HANDS telescopes to stars in the Landolt catalogue, a standard for stellar magnitudes or brightness. These matches are processed to calibrate the HANDS data. We analyzed star field images to determine the most appropriate tolerance values on coordinate and magnitude matches of catalogued stars. I created a Matlab script that extracted data from images taken by a HANDS site at Kirtland Air Force Base, NM and plotted magnitude offsets of correlated stars as a function of their coordinate offsets. By identifying obvious outliers on the graph as incorrectly correlated stars, we determined at what tolerance values stars from the HANDS images have most likely been correctly correlated with catalogued stars. The analysis concluded that a configurable magnitude offset tolerance is the most effective way to remove incorrectly correlated stars from the calibration process. The calibration coefficients calculated from these correlated stars are imperative for correctly identifying tracked items, a necessary step in improving our awareness of orbital objects.