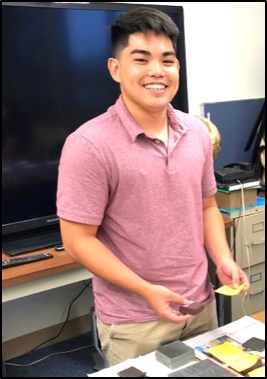 Joshua Tokunaga was born and raised on the island of Oahu. He graduated in 2016 from Saint Louis School where he played football and basketball. He currently attends Arizona State University and plans to graduate in 2020 with a BS in Earth and Space Exploration: Astrobiology and Biogeosciences and a minor in Sustainability. He is specifically interested in planetary science and hopes to pursue a career as a research scientist. In his free time, he enjoys watching and playing sports, hanging out with friends, and helping those in his fraternity, Phi Kappa Tau, with schoolwork, events, and meetings.

In-situ resource utilization (ISRU) is the practice of using resources naturally found on planetary bodies in order to minimize the payload weight of a spacecraft launched from Earth. On the Moon and Mars, the resource available is basaltic regolith (loose unconsolidated rock material found on the surface), which could be used to create structures such as vertical launch and landing pads, foundations, and shelters.  The Pacific International Space Center for Exploration Systems (PISCES) creates construction materials through a process known as sintering, where loose aggregate material is fired much like ceramic in a high temperature kiln. Due to Hawaii’s chemical and mineralogical likeliness to the Moon and Mars, Hawaiian basalt aggregate is used as simulant feedstock for the production of tiles and pavers. In order to investigate the viability and characteristics of sintered materials, multiple tile samples were tested to check for sinterability and to understand their mechanical properties. These samples originated from different commercial quarries across the island of Hawaii and were fired under varying conditions (grain size, temperature, etc.).  Lab tests such as hardness, porosity, and density were performed on all sintered basalt samples. Tiles that sintered well were tested for thermal conductivity, specific heat capacity, thermal expansion coefficient and thermal shock. These thermal properties will give insight into how sintered basalt behaves under the extreme temperatures of foreign environments and whether it will fare well as a launch/landing pad. Results show that tiles sintered at higher temperatures had increased hardness, density, and less pore absorbance. Higher sintering temperatures fuse grains together more efficiently which limits the amount of air space between them. These tiles also proved to be better heat conductors and have greater specific heat capacities.  The data obtained from these various experiments were used to update and add to PISCES’s research in understanding the physical and chemical behaviors of sintered basalt, and its place in the future of Lunar/Martian colonization.