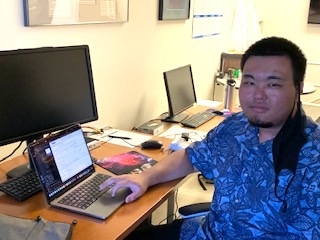 Taylor grew up on Oahu, Hawaii. He graduated from Hawaii Baptist Academy and has already completed a bachelor’s in Marketing. A newly found love for statistics sprouted during his business courses and now he is pursuing a second degree in Computer Science with a focus in data science. He hopes to continuously grow his knowledge and passion through practical applications for the betterment of society.

W.M. Keck Observatory is attempting to shift night time operations to a remote setting. The Unattended Night Operations (UNO) Remote Audio Monitoring project aims to allow operators to detect melting ice dripping,mechanical failures and a series of other dangers to the telescope through cameras within the facility. Cameras made by Axis Communications are connected to a Synology surveillance device which is accessible through their web-based API. Audio and video is accessed through real time streaming protocol (RTSP) streams which are obtained from the Synology web based API. Those streams are then processed and ordered using PyQt5 and VideoLAN Client’s (VLC)s python media player. To ensure both audio and video streams were being transmitted, tests with various python libraries such as VLC, PyAudio, FFMPEG, and OpenCV were conducted. The results held that a RTSP stream from the Synology API would produce expected results. A graphical user interface created from PyQt5 with a VLC player as a widget and a dropdown menu, based off of Synology’s API, produced the most desirable outcome. As a minor suggestion, W.M. Keck Observatory could deploy a dispatcher to check each camera to obtain the current status.